It’s time for one of my least favorite posts of the year – Senior Fifth. For our longtime Daily Deac-ers, you may recall that each fall at the last home football game, some of our senior students participate in a dangerous drinking game called Senior Fifth.  My colleague Peter Rives (’98), Assistant Director of Wellbeing – Alcohol and Substance Abuse Prevention, takes it from here: 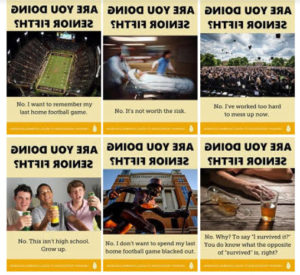 resist peer pressure and to challenge assumptions that Senior Fifth is safe or universally accepted. Students have already begun seeing posters about the risks associated with alcohol poisoning, or posters that invoke nostalgia that seniors might feel about their time spent at Wake Forest, or the conflict between high-risk drinking and achievement. You can see some examples here. These posters are just one small part of a much larger prevention and safety initiative.

Our Senior Fifth prevention campaign has made great strides. While some students continue to participate, there is growing anecdotal evidence that the cultural importance of Senior Fifth is waning and that on the whole students see it as a bad idea and dangerous activity rather than an inevitable part of the college experience. You can see from this graph that we have had a substantial reduction in harm since 2015. 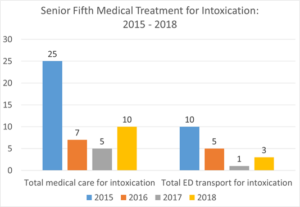 Let me add a word about the uptick in numbers in 2018. In 2018, kickoff was 12 noon – which was 7.5 hours earlier than the prior year. Blood Alcohol Content (BAC) is influenced by 4 key variables: sex, weight, amount of alcohol, and time. Knowing there was a much shorter time before kickoff, we expected that this reduced time frame would result in higher BACs and therefore higher occurrence of students requiring medical intervention for intoxication.

Having partners – both on campus and with families/loved ones – really matters when it comes to harm prevention. In the 2 weeks leading up to the last home football game of 2018, the Old Gold & Black featured 5 different student-written pieces discouraging participation in Senior Fifth. Faculty and administrators have resources to use to help spread the message of abstention from Senior Fifth, but we can also use your help.

If you are the parent/family member of a senior, talk to your student – either overtly about Senior Fifth, or about high risk drinking behavior in general, your expectations for their safety, etc. If you have a younger student, consider beginning a conversation about high risk behaviors and Senior Fifth now that builds over time. Whether they admit it or not, your opinion really matters to your students.