Yesterday our men’s tennis team won the National Championship. Because it was played in town at the tennis complex over by the football stadium, there were plenty of Demon Deacon faithful there to cheer them on and celebrate the victory.

Congratulations to our team and our coaches!  The full news release from Athletics is below. GO DEACS! 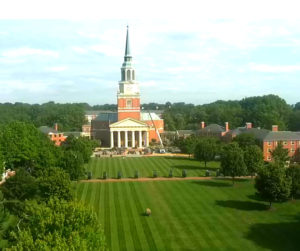 In the aftermath of Commencement, we have slowly been getting the campus back to normal. Here’s a screen shot of the Quad Cam from around 9:30 this morning. The Commencement stage is gone, those brownish blocks you see at the mid-Quad point are pallets of folding chairs stacked and ready to be moved out. I bet by the end of the day even the crane is gone. That’s how quickly we work.

You’re at the midpoint of your weeks, Deac families. Finish strong!

WINSTON-SALEM, N.C. – Capping a season in which the Wake Forest men’s tennis team occupied the No. 1 spot from the get-go, the Demon Deacons defeated No. 3 Ohio State, 4-2, to capture the 2018 NCAA National Championship for the first time in program history on Tuesday, May 22 at the Wake Forest Tennis Complex.

Off the coin flip, the championship match lived up to its billing in doubles and singles with the outcome hinging on the last two courts.

Senior Skander Mansouri put Wake Forest up 3-2, causing heads to swivel between the final courts – one and four. At the time, Ohio State’s Tim Seibert was trying to force a third set on Bar Botzer, up 5-2 on court four, while No. 7 Borna Gojo was trying to do the same on court one against No. 6 Mikael Torpegaard. As Gojo fought into a tiebreaker, Botzer staged a furious comeback, winning five straight games to clinch the Demon Deacons’ Championship.

The NCAA title represents the school’s ninth team championship, joining men’s baseball (1955), men’s golf (1974, ’75, ’86), men’s soccer (2007) and women’s field hockey (2002, ’03, ’04). Wake Forest’s run in the NCAA Tournament started to be historical after earning the program’s first trip to the semifinals, leaving the two next matches to further rewrite the record books. The Demon Deacons finished 31-2 overall, a program record for wins in a season, while Ohio State closed the season 34-3.

In doubles, neither team on court two dropped a serve in the first 10 games, building tension in the 5-all affair. On deuce point of the 11th game, No. 35-ranked Petros Chrysochos and Botzer broke OSU’s serve with a shot at the net, and then held to defeat No. 61 Torpegaard and John McNally, 7-5. While Wake Forest was up 6-5 in court three’s tiebreaker, it was court one that secured the 1-0 Demon Deacon lead. The Buckeyes were on serve, down 5-6, aiming for another tiebreaker, but a tip ball off the net landed long, giving No. 21 Gojo and Mansouri the clinching 7-5 win against Martin Joyce and JJ Wolf.

The competitive play spilled into singles with an even split of first sets. Ultimately the second sets played out exactly the same for the five finished matches. After Ohio State knotted it at 1-all with a win on court five, Chrysochos, like clock work, meticulously ran through Wolf, 6-1, 6-3, on court two. Not wavering in consistency down the stretch, the win that put Wake Forest up 2-1 marked Chrysochos’ 24th straight victory.

Not letting up, the Buckeyes took court six to tie the match at 2-2. Mansouri, a senior from Tunis, Tunisia, recaptured the pivotal lead for the Demon Deacons on court three. After taking the first set, Mansouri, ranked No. 38, broke McNalley’s opening second-set serve to hold leverage. Mansouri picked up an additional break to take a commanding 5-2 lead, and held for the 6-2, 6-2 win against 92nd-ranked McNalley. The win led into the final sequence between the marque matchup playing out on court one and the comeback by Botzer on court four.

The individual portion of the NCAA Championships commences Wednesday with the singles bracket, while the doubles starts Thursday. Chrysochos, Mansouri, and Gojo each compete in singles, while Botzer/Chrysochos and will play in doubles.