It’s Wednesday – the hump in the middle of the week – and your Deacs who are still here are hard at work on their final exams and projects.  Stay strong, Deacs!  It’s almost over!

There are all sorts of practical matters to cover today regarding parking.  Click the links below if they apply to your Deac:

Students who have cars on campus now and will be packing them to go home, OR leaving them on campus during break

Closer to the time that young women return for sorority recruitment in early January, we will also have some information about food service during those days.

There’s also some great news for my beloved soccer team.  Our senior midfielder, Ian Harkes, is a finalist for the MAC Hermann Trophy.  From their website: “The MAC Hermann Trophy, the most coveted individual honor in NCAA Division I soccer, has been awarded annually since 1967. This year’s winners will be announced on January 6, 2017 in conjunction with the 2016 MAC Hermann Trophy Banquet at the Missouri Athletic Club in St. Louis.”  Congratulations, Ian!! 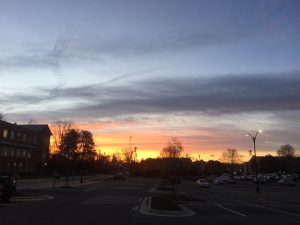 Wish I could have snapped a picture of the beautiful full moon this morning.  As I was driving to work, there was a huge, hazy yellow moon – with some clouds and mist around it, which made it look even brighter and bigger. Also a terrific sunrise – very orange as I drove to work, but the light changes so quickly that I could not get a decent photo of the color at its brightest.  Here’s what I was able to get.  Rather an unromantic shot, as it is over the parking lot outside of Alumni Hall. But the sky in the east towards the Sutton Center and the Miller Center was really something.