Today is the happiest day in November: Pitsgiving!! It’s the day of nearly endless Thanksgiving bounty in the Pit. And since I’ve never done a Five Senses post on Pitsgiving, I thought I’d give it a try. Here goes.

A line outside the Pit (on the lower Mag patio) at least 20 people long.

A guy in a long sleeve shirt and shorts. It feels a bit too cold for me for shorts.

Several people in line in front of me are not wearing coats, but are clearly cold, their arms crossed over their bodies to stay warm.

People in line peering through the windows to the Pit trying to scope out empty tables. Though Pitsgiving just opened a few minutes ago (I got there about 11:05), the place already looks packed.

Tables with Thanksgiving style decorations on them. Gobble til You Wobble! says one of the signs. I think another might have said Time for a Food Coma!

An *enormous* line to get through the main buffet. It literally spreads through most of the center of the Pit and wraps around the pizza station side.

Other food stations, which have allergy-free turkey and fixings, a wings bar, a cobbler bar, baked potato bar, all kinds of desserts and cupcakes, a vegan station replete with a tofurkey, and a section that has pizza (oddly enough). The salad bar is the only thing without a giant line so I start there.

Lots of tables that are empty of people (they are all in line) but are claimed with coats, phones, keys, backpacks.

Students walking in twos and threes looking for seats.

Pit workers in fun green shirts that say Pitsgiving. Some are wearing headbands with springs on top with turkey legs wobbling to and fro as they walk. Supercute.

The long buffet line thins out as most of the early arrivals are served, then a longer line reforms closer to 11:30-45ish.

People squeezed into every conceivable space in the Pit. The staff has done a great job adding tall cocktail tables where it is standing room only. I see a girl hitched up on a ledge between two tables, eating from her lap. No biggie. This is Pitsgiving, and anything goes.

An advisee of mine, who calls my name and says hello. We share a quick hug and hellos. The advisee and friend go off to seek a table. They seem very excited for their first Pitsgiving.

A girl say “I just want my bed!” I can’t hear what preceded that line, but I assume she is talking about going home for Thanksgiving.

The creak of the Pit entrance door.

The sliding of ID cards as people enter the Pit.

“Oh, the cobbler is SOOOO good!”

One student saying “I’m eating too fast!” and another student quickly retorts “Well, this is America…“

The clinking of ice from the ice machine filling and empty glass.

A student saying that the turkey is dry – then waiting a second or two and amending saying “no, it’s pretty good.“

A sassy “Whazzzzuuuuppppp, gentlemen?” as a male student comes up to a table of presumptive friends.

One student saying “I don’t like pie” and then the other friends reacting with shock and horror that someone could dislike pie.

The sound of a chair backing up and a student getting their backpack to leave, and almost immediately the chair scoots back in with a new occupant. Clearly, a member of the friend group is taking the place of the one who just departed.

A constant, humming buzz of conversation. It’s hard to pick out any individual words or phrases with so many people here.

“It’s yams and sweet potatoes, baby” says one of the Pit workers to a student asking about a particular casserole.

Roasted meats inside. It is a great smell.

The smell of steam rising up from the various chafing dishes in the buffet.

Gravy and stuffing. It smells herby and salty and really comforting.

Baked potatoes. The hot sauce on wings. An odd whiff of pizza.

Salad with caesar dressing. The lettuce is nice and crisp.

Allergy free turkey. It is seasoned really well, with herbs on the edges. Nice and moist, even without gravy. I have to confess I hit the allergy station first because it had no line and I wanted some turkey.

Herbs. The gravy has some visible herbs – could be a thyme-rosemary kind of blend.

Mac and cheese. I served myself a scoop from a corner where the top seemed a little crispy.

Stuffing. There were two different pans – not quite sure if one was regular bread and one was cornbread. They were not as good as the late Grama Chapman’s cornbread dressing, but still very Thanksgivingy and comforting.

Bread pudding with chocolate sauce on top. I pity the Deacs who went only for the cobblers, pies, or cupcakes and never saw the bread pudding, because it was FAB.

Cold air while I am outside waiting in line to get into the Pit.

The warmth of the sun, which balances out the cold air.

A backpack under my feet. The tall cocktail table I am eating at is smushed into a corner with a few other tables, and students at other tables have slung their backpacks on the floor. When I make another round to get food, I accidentally step on the edge.

Excitement in the air. There is an energy here. It starts with people searching for tables – and a certain amount of pride when you find a spot. But then the excitement grows as you get your big ole plate of food.

Joy. It is not possible to be grumpy at Pitsgiving. Everyone seems like they are really loving life. And the longer I sit here and witness it, the more I realize that what I am seeing is love. Our Pit staff, God bless them all, are going out of their way to give these students a taste of Thanksgiving.  And watching the students eat in groups, I realize that the friends they are eating with is their chosen Wake Forest family, if you will. It really does feel like a celebration. While the vast majority of them will go home for Thanksgiving, Pitsgiving offers a chance to have a holiday meal with the people here that they love. Friendsgiving. And that fills my heart with more joy than I can say.

Pics below. If your Deac missed it at lunch (or just wants to go again), Pitsgiving runs through 8 pm.

Happy Pitsgiving to all, and to all a good night! 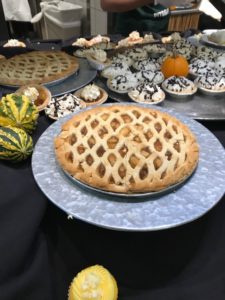 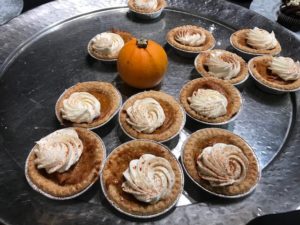 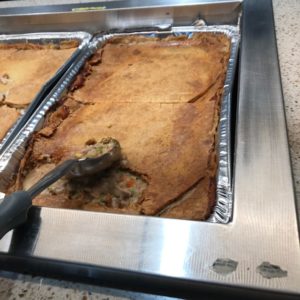 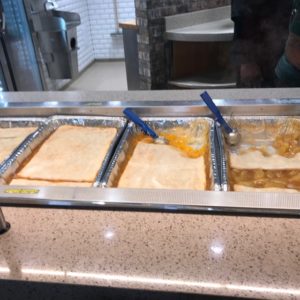 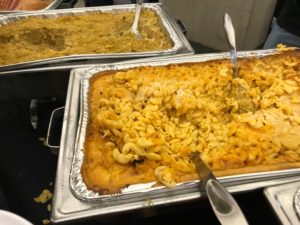 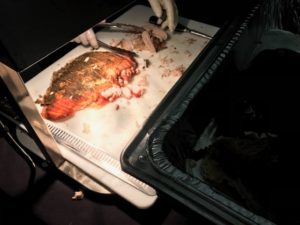 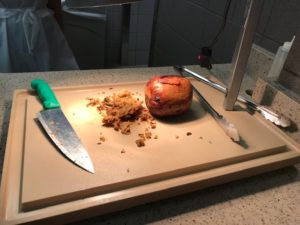 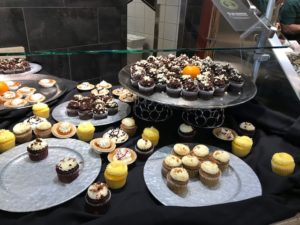 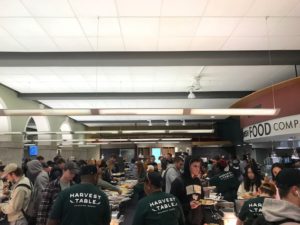 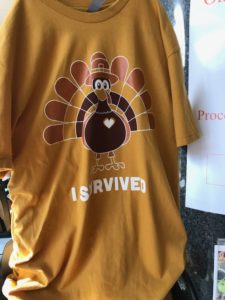 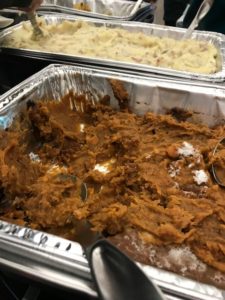 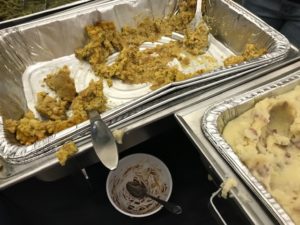 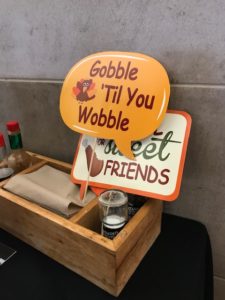