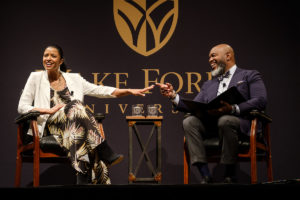 This past Friday night, I went to the keynote address of the Arts of Leading conference, with none other than Renee Elise Goldsberry, actor and singer extraordinaire. Ms. Goldsberry originated the role of Angelica in Hamilton and won a Tony Award for it. It was an unbelievable event – maybe the best WF event I can remember in a long time – and I am going to try and do justice to it here.

First I have to say, I was a little nervous going into this event. You know how you can like a celebrity so much just based on the work they do (whether an actor or a star athlete or whatever) and you are anxious that the reality of seeing them as a person vs. on stage might break the spell somehow? Let me tell you, in this particular case, she is way more amazing in person (and I had already imagined her to be pretty darn spectacular). I told a friend after the event that I legitimately lament that REG and I are not best friends. Because she displayed such honesty, charm, intelligence, kindness, and leadership – and oh yeah, TALENT – that she is someone you just want to know better. A total delight.

She was interviewed by her friend Dr. Derek Hicks of the Divinity School (also who I don’t know but wish I did). This had almost a fireside chat feel, like you were a fly on the wall of a deep conversation between friends. But one of REG’s great gifts is that even in a room of 1,000+ people, she genuinely connected with the audience. Made eye contact. Smiled. Looked around for reactions and responded to them with enthusiasm.

I won’t do justice to the full content of the talk, so here are some bulleted highlights (paraphrased).

They then transitioned out of the interview/conversation and into a performance. She said she was going to sing a couple of songs that we would not know [cue the audience’s collective heart sinking that there would be no “Satisfied” tonight]. As an artist, REG said she felt compelled personally to pick songs that inspire us to love, and to remind us in these fractured times that we have more in common than we realize.

She launched into a fabulous rendition of “People Get Ready.” We all knew this from Hamilton and her other shows, but this woman has a serious set of pipes. What a voice – and such an expressive face while singing.

The second song was from an album by Lizz Wright, a jazz and gospel singer (did not get the title). Before the song, she taught us the chorus and would have us be her backup singers (so cool!) 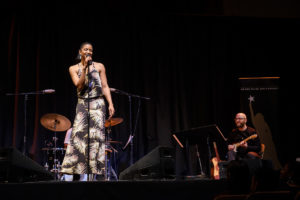 Then she said she had time for only one more song. And that since we had come out to see her, it would be rude if she didn’t sing the one thing we wanted. AND SAID SHE WOULD SING “SATISFIED.”

At this point, the 1,000+ people in Wait Chapel collectively lost their minds. I had hoped that she would sing it, but despaired that she would not because it is not strictly a solo and maybe it would be too hard. But she told us to sing the other peoples’ parts – which we did.

And she launched into “Satisfied,” and it was incredible. I have not had the good fortune to see Hamilton, but Angelica is my favorite character and “Satisfied” my favorite song. And I honestly thought never in my life would I be fortunate enough to see her sing it live. Never not ever. So this was like the biggest gift in the world that you didn’t think you were going to get. Thank you, REG!

Honestly, she is just so alive and vibrant and thoughtful and kind. She thanked the sign language interpreter at the end, thanked the band and the crowd. She just seems like a person you want to gravitate toward because of her seeming kindness and general amazingness. In my next life, I want to be her BFF.