I was at a gathering last night where there were a bunch of seniors. Some of them were former advisees or students I came to know early in their time at Wake, and I feel like it was just yesterday that they were freshmen. One of the things I asked them was about was what they would miss about Wake Forest. Perhaps not surprisingly, it was things like walking across the Quad, and the friends they had made (both students and faculty/staff).

We also talked about how there are still a ton of big events happening between now and the end of the semester. If you take a quick peek at the Events Calendar, there are a number of wonderful and noteworthy events coming up. These are just a few of them – check the Events Calendar for the full list.

The Student Art Exhibition Opening Reception will be held tomorrow night, April 19th.  There is also a Senior Sendoff on April 25th, the Student Choreographic Concert on the 26th-28th. Another big year-end tradition is the Chi Rho Big Concert. One of the members of Chi Rho emailed me about the event and wanted it shared with the Daily Deacdom: “Chi Rho, Wake Forest University’s men’s Christian a cappella group, is holding its annual Big Concert on Saturday, April 28th at 8pm in Wait Chapel. Admission is free, and we would love to have any parents, students, and other members of the Wake Forest community join us for this fun hour of worship and celebration. We hope to see you there!”

Also at this time of year is the official transition of Student Government leadership. One of my contacts in Student Government filled me in on their new officers’ swearing in: “This past Tuesday (4/17), the new Executive Branch of Student Government was inaugurated by President Hatch for the 2018-2019 school year.  Junior Danny Reeves was elected president amongst four candidates and sophomore Maia Kennedy was elected secretary amongst two candidates. Junior Sydney Packard was re-elected for a second term as treasurer, Junior Will Hargrove was elected Speaker of the House, and Junior Daniel Oberti was appointed Chief of Staff. Student Government and the new Executive Board is excited and ready for another year of hard work dedicated to bettering the Wake Forest experience and representing our students!  You can follow WFU Student Government on Facebook and Instagram @wake_sg and Twitter @wakesg.” You can see some pictures from their ceremony below.

Our students – in all their various organizations – represent such a wide variety of interests, talents, and ways they serve to make WFU a better place. Reason number eleventybillion that I am proud to be a Deac 🙂 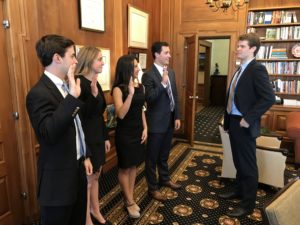 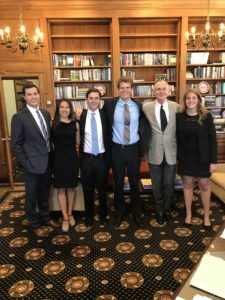