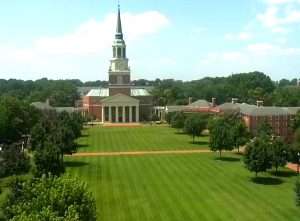 Much of the country is sweltering right now, I know, but Winston-Salem feels particularly steamy this week. It’s been in the low 90s and very sunny, which means everyone is trying to stay inside and stay cool.  You can see from the Quad Cam that it is not exactly bustling here.

On the subject of staying cool, let’s talk ice cream!  Here’s a couple of places your Deacs might like to frequent – or you could during Family Weekend.

The low budget, student version is Cook Out.  Cook Out is a company that started in Greensboro, NC in the late 80s.  It’s fast food, drive up only (no eating inside), and they specialize in the holy trinity for most college students: fast, cheap, and a lot of food for your dollar.  They are particularly loved for their milkshakes, with 40+ on their menu.  Many a Wake student has done a late night Cook Out run.

For frozen yogurt, I am told all the cool kids go to either Brynn’s or Kilwin’s (which is in Thruway Shopping Center).  I haven’t eaten at either of them because I am more an ice cream girl than a frozen yogurt girl.

The more upscale ice cream place has been a Winston-Salem staple since I was in college – Blue Ridge Ice Cream.  They make homemade ice cream in fantastic flavors (mine was always Mexican Vanilla) and mash in all kinds of candy or other goodies into them if you like.  A few years ago, they were acquired by Dewey’s Bakery, home of the best cake you will find in Winston-Salem.  Nothing like one of their pink lemonade cake squares and a little ice cream on the side to beat the heat.

And just to be completely transparent, I have no relationship to Cook Out or Blue Ridge/Deweys, other than being a customer 🙂