Normally it is not easy to do a Five Senses post in the summer, but because the Summer Management Program is going on, there are a bunch of students in Farrell. So I parked myself in front of Einstein’s Bagels and observed.  Here’s what I can tell you: 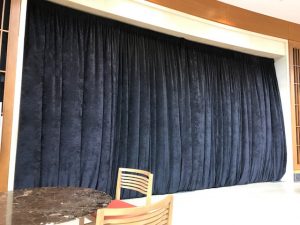 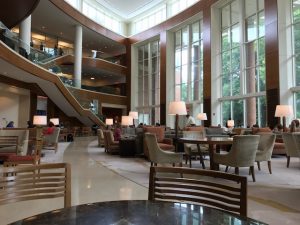 Tables set up against the windows for a reception. They have glasses laid out in neat rows. A nice tall floral centerpiece with a couple of sunflowers on top (side note: sunflowers are one of my faves because they are essentially black and gold!)

The Living Room seating area has about 12 sets of distinct student groupings. More female than male, though some are mixed groups of young men and women.

Einstein’s Bagels is closed and it has a ruched, velvety black curtain hanging over it. Very strange to see it closed and decked out like that.

In the far windows I can see a student playing ping pong on the patio outside. I can only see the one student, the other(s) are hidden from view by the door.

A number of faculty or staff members in 1-on-1 meetings with students.  One in particular looks like a mentoring conversation and I wish I was close enough to overhear it, because their body language made it seem like a deep and meaningful conversation.

One of my former advisees looks like she is in a group meeting with other students.

A laptop at a table with a sorority letters sticker on it.

Out of the corner of my eye, I see one of the Ping Pong Guys sprint after a ball before it goes too far into the grass.

A handful of Trustees are in the Living Room; they are having a meeting and my guess is a few have stepped out to take phone calls or are on break. I see faces of Trustees I know and they are people I like a lot and am glad to see on campus.  These folks love Wake Forest and work very, very hard to help us be the best we can be.

One of my favorite faculty members (who recently retired) – gave him a little pat on the shoulder as I walked by him to my table.

Grey, overcast skies. Looks like it could rain at any minute (yet it doesn’t).

A couple of students (or maybe someone here for a conference or camp) with a lanyard and nametag on it.

ESPN on one of the flat screen tvs. The other tv is farther away – and my eyes are old – it is either CNBC or CNN.

Finally a ball gets away from Ping Pong Guys and one of them has to walk a greater distance to fetch it.

Doors opening and closing. These are the kind of push-bar doors where you push down to open (making a certain metallic noise) and then it makes a louder Click! once the door latch closes.

The sudden, loud SQUEAK! of a sneaker against the floor. It stops almost as soon as it starts, presumably because it was loud and the wearer of the sneakers caught it in time.  It happens about 3 more times during my stay in Farrell.

The hum of Einstein’s coolers or ice machine running. A low, vibrating buzz.

Rustling of a tablecloth being opened in the air and laid over a table for the reception.

Laughing from a nearby table of students.  A lovely sound.

A girl coughing (a less lovely sound  – but not as bad as during late fall when the grunge is going around).

The sound of flip flops thwacking against a student’s feet as he walks by.

The Einstein’s ice machine dumping its newest cubes – you can hear them clink and clank down.

Jingling of keys as a guy walks through the Living Room twirling car keys in his hand.

Loud talking in a nearby corridor.  The sound carries.

Overwarm. I hustled to get over to Farrell, and I had spent a good bit of the day making boxes of New Student Reception supplies and taking them to the post office, so I feel a bit hot (and I am glad I dressed a little more casually today, knowing I had to do a bunch of physical work).

To me the air feels both humid and sticky.  Perhaps it is because there is a reasonably steady stream of people opening the doors and letting the humidity in.

Absolutely nothing, which is very strange for the Farrell Living Room.  But because Einstein’s is closed, I can’t smell coffee or toasting bagels.  Also, I am far enough away from other tables that I don’t get even the slightest whiff of perfume or cologne.

No taste, as Einstein’s was closed. I could really, really have gone for a Diet Pepsi.  Oh well.