Blast from the Past

It’s my 25th reunion this fall, and classmates of mine have been posting in the Class of ’92 Facebook group. So today I am thinking about how much has changed in those 25 years.

– no cell phones, but lots of students brought land line phones that plugged into their rooms

– very few personal computers – if you were lucky you had a friend who let you use theirs.  You could also go to the ZSR Library and use one a computer in one of their computer labs

– no email or internet 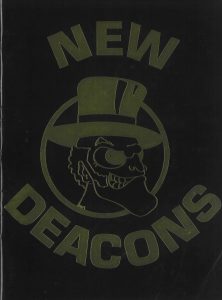 – no social media.  THIS was our version of Facebook – it was a paper book of the freshman class.  You sent in your picture, your name, hometown, high school, your possible major, and hobbies, and it went in what was called the “Freshman Look Book.”  The book was produced by our Dean of Students office and the Interfraternity and Panhellenic Councils, so they had pages about each of the Greek groups.  There were no national sororities when I was here, only local 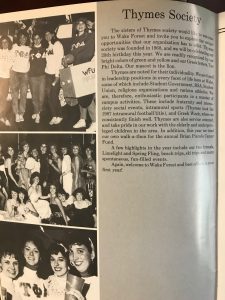 “Societies” that functioned in the same ways, just without a national affiliation.

And to blast even further back in the past, a couple of years I got a hold of an old handbook, Happiness is Being a Wake Forest Co-ed, which is from 1966 I believe.  If you really want a chuckle, you can see what coeds of days past were told about starting their life Wake. Happiness-is-Being-a-Wake-Forest-Coed1

What will be obsolete when your Deacs are 25 years after graduation? Will cell phones seem quaint like the abacus? Will we still have cars?  Travel by rocket, or some personal travel thing like the Segway?  Will your Deacs be doing jobs that we haven’t even dreamed up yet? Will we be wearing crazy new fashion (please, please, let 80s hair not make a comeback!)

25 years comes faster than you think. Trust me.