Some of our Deac parents and families have already seen snow this season.  We’ve got none of it in the forecast, but if you want a glimpse of what life looks like on those occasions where we do have snow, a few pics are below.

So, what happens when it snows here?  One of the first things is that students get all amped up hoping to get a phone message saying that class is canceled.  The most popular guy on campus in those moments is my friend and colleague Kevin Cox, who is the voice that brings students the blessed “weather related announcement” they were hoping for.

Depending on the amount of snow, there will be snowmen, snowball fights, and – yes – the occasional irreverent word or symbol traced via footprints (these are college kids, after all).

Another fascinating thing about snow on campus is the reaction of our students who come from places where it rarely or never snows.  For most, it is sheer delight and the kind of glee you have as a little kid when you get the gift you’ve been dying to have.

There is no snow in the forecast, by the way.  It’s going to be getting progressively colder at night, but we are supposed to be in the 50s to near 60s for the next ten days.  Still, for those who wish they could see the campus under a blanket of white, these pics will have to do. 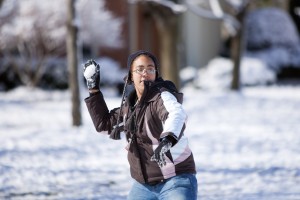 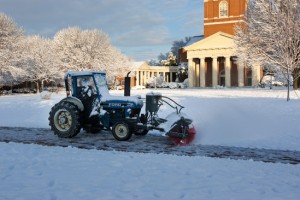 A light blanket of snow covers the Wake Forest campus on Friday, January 18, 2013. A snowman stands in Manchester Plaza. Views of the Wake Forest campus after a light snow on the morning of Tuesday, February 24, 2015. Students cross Hearn Plaza in this aerial photo from Wait Chapel. A snow man stands on Hearn Plaza on the campus of Wake Forest University after a light snow on Monday, February 20, 2012. A light blanket of snow covers the Wake Forest campus on Friday, January 18, 2013. A view of Hearn Plaza and Wait Chapel.