A Circus is Coming to Wake Forest 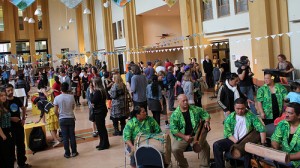 The Z. Smith Reynolds Library is usually a peaceful place where coffee-sipping students spend many hours studying. Honest, parents, this is where your students usually are. But next Friday night, over Family Weekend, the library will be loud. In fact, it will be a circus. A Musicircus.

Unless you are a John Cage (1912-1992) fan, you may be unfamiliar with this event in which multiple performances of all kinds take place — at the same time. Ensembles and soloists prepare works to perform for the Musicircus, and each group plays what it has prepared, planned and rehearsed.

Listeners roaming through the library atrium might hear a brass quintet, a string quartet, student bands, a cappella groups, a Renaissance band, operatic arias and a drum circle, all at the same time. The simultaneous performances create unusual and exciting configurations. We hope to have as many as one hundred fifty people participating from the Wake Forest community and beyond.

The Musicircus is the kickoff event for Cagefest, a series of events celebrating the 100th anniversary of Cage’s birth.
The event is an interesting contrast to Cage’s most famous composition 4’33”, (pronounced four minutes, thirty-three seconds) where the score instructs the performer(s) not to play their instrument(s) throughout the piece’s three movements. In spite of its nickname, “the silent piece,” the purpose of 4’33” is to show that there is no such thing as silence. There is always something to hear, and when attention is paid, the sounds of the world prove to be as interesting as the sounds created by composers.

Cage’s work pushed the boundaries of music, and even the act of listening. I would argue his ideas have been the spark has that has ignited all musical developments since and will continue to spur creativity well into the 21st century. He was a true poly-artist — composer, poet, writer and artist — a man whose idea to bring together a wide variety of people for an exchange of musical and theatrical performances does not seem too far removed from the way people today connect on the Internet, often creating interesting “music” from a seeming discord of voices.

We expect a wide range of musical styles, performance genres, levels of experience and ensemble sizes to be represented at the Musicircus. Please join us Sept. 28 any time between 5 to 7 p.m. The more, the merrier!

Read more about Cagefest in the Winston-Salem Journal’s story, “Cagefest at WFU.” NPR’s “Music is Everywhere, John Cage at 100” offers more information on John Cage and his music.