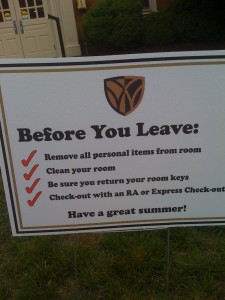 We’re halfway through finals, and some of your students may already be home (or coming soon).  Others still have work to do, or the beach for Post-Exams.  There are signs all over campus outside each residence hall alerting students about what they must do before they officially check out of their rooms for the summer.  Because students are a bit frazzled during finals, please remind them to follow the proper check out process – they can ask their RA what to do if they are unsure.

Lastnight was a stormy one – late thunderstorms.  It’s decidedly colder on campus this morning – the kind of weather where you need a light jacket and long pants.  Only supposed to go up to the mid 60s today. There were a couple of students on the Quad as I walked in this morning,  and clearly they had not been following the weather.  A young man had on shorts and a tshirt (which would have been perfect yesterday when it was in the low 80s), and a young woman had shorts and a large Wake sweatshirt and she had her arms wrapped around herself.  They both appeared to be on their way to either a final or the library, and neither looked like they had time to go back from whence they came for warmer clothing.  Sometimes you just have to stick it out. 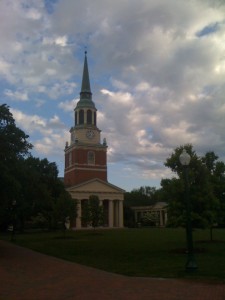 Here’s a view of the Quad and the sky this morning.  There are darker clouds on the south part of campus, but here on the north side over the chapel, it’s a very pretty sky.