Glimpses of the Lounge Outside the Mag Room

This morning when I arrived at work about 7:45, they were pressure washing the windows of Reynolda Hall.  Presumably this is part of the vast beautification process leading up to Commencement.  The Quad grass has been plugged and seeded, and you can see the tiny clumps of dirt that have been dredged up during the aeration process.  Give our Facilities guys a few weeks and the grass will look like green velvet, I guarantee.

I walked up the front steps to the second floor of Reynolda Hall and just inside the doors at a table by the entrance, was a young woman studying.  Her table was facing the windows with a direct view of the chapel.  Books spread out, wire bound notebook open and she was writing.  I’d venture a guess that she had just gotten up – she was in glasses and a ponytail – and was immersed in what she was doing.

Good for her, I thought.  She’d found a quiet space on campus, and one with a magnificent view, to do her studying.  From now until finals, students are going to have to be finding their own study niches.  For some students it’s Starbucks and the constant whir of the coffee grinder and milk steamers, for others an all night study room in one of the academic buildings, or in a forgotten section of Reynolda Hall after hours, when most of us have gone home.

Midmorning, I emerged from a meeting near the Mag Room and there was a young man playing piano on the old upright next to the lounge.  Have no idea the tune, but he played beautifully.  It was nice to have some unexpected music in Reynolda.  In each of the residence halls, there is a piano in their respective parlors, and many a student will play there for fun.  But to get to hear music during work hours in a non-traditional student playing zone was a real treat.  Young man with dark hair, I hope you come back often.

PS – this picture was not the girl I saw studying.  It’s an older shot, but of the same spot.  I always thought this would be a great study space. 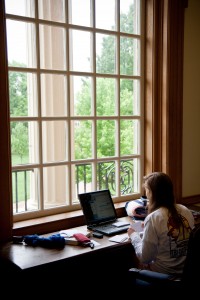