The Evolution of the Demon Deacon

Today’s Old Gold and Black has an article on the Evolution of the Demon Deacon mascot: 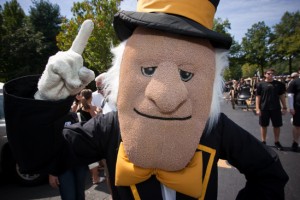 “The white-haired gent with a fierce snarl, gold and black top-hat, and butt-like chin has been a well-known image since the early 1940s — but where did he come from?

As early as 1895, Wake Forest (then called Wake Forest College) claimed the colors gold and black in athletic competitions and debates, and for about two decades, used a tiger mascot that was designed by a student.

The school’s literary magazine, called The Wake Forest Student, described it in this manner:

‘At last, Wake Forest has a college badge. It is a very neat button designed by Mr. John M. Heck and contains a tiger’s head over the letters WFC. The colors are in old gold and black.’

At the time, the mediocre Wake athletic teams earned the nickname ‘Old Gold and Black’ from the color scheme of their uniforms, and were also often referred to as the ‘Baptists’ because of the school’s religious affiliation.”

Read the full article online, or browse the entire online issue of the Old Gold and Black. And if you want to know more about the history and traditions of your student’s school, the Traditions Council published an excellent brochure about Wake Forest traditions. If you’re returning for Family Weekend next weekend and want to be up on all things Wake Forest, you can give the “Little Black Book” a read.