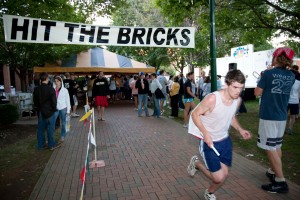 Hit the Bricks is one of the campus’ finest traditions. It’s a service event that the entire campus embraces as part of our commitment to serving humanity – running laps on the Quad (Hearn Plaza) to raise money for cancer.

One of Wake Forest’s most celebrated sons was Brian Piccolo (’68), a football great who later went on to join the Chicago Bears. Tragically, his life was cut short by cancer, but he was immortalized in the movie “Brian’s Song” (a must watch for all Wake Foresters).  Since 1980, Wake Forest students have been directing their philanthropic and charitable efforts towards the Brian Piccolo Cancer Drive, raising $1,000,000 for the WFU Cancer Center.

Hit the Bricks occurs every fall.  Teams of students run laps on the Quad, earning extra points for carrying backpacks with bricks in them as they run. It’s a great competition between teams, both Greek and non-Greek alike. 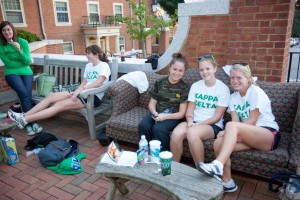 Students set up chairs in the Quad to watch their teammates and rest while they wait for their shift, there is live music and remarks on a stage throughout the day. Campus administrators and faculty participate as well as students. 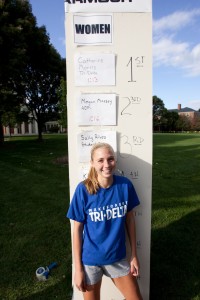 For those of you here early for Family Weekend, Hit the Bricks will take place on Thursday, September 30th from 11 am to 7 pm. The winners have bragging rights, but all our students can claim to be doing something remarkable by giving their best in honor of all who are affected by cancer, and in hope for a cure.

You can also get a sense of Hit the Bricks from this local news story on Youtube.