Well, we’re back to business: campus is operating on normal schedule today. And hats off to Facilities, they have done a remarkable job in dealing with 14 inches of snow. The sidewalks and roads are clear and have salt to keep from freezing. I walked from Alumni Hall to Benson today and only really felt like I needed to watch my footing once with a slushy spot.

Getting 14 inches of snow means there really isn’t a lot of room to put it – so especially in our parking lots, we have some big snow banks. Some cars have parked pretty creatively – if there was a snow bank at the back of two spaces, they parked parallel. A former employee I know would have referred to those cars as being catawampus, which is a great Southern way of saying askew or awry.

So all this snow has been piled in parking lots and along the pathways. You can see some pics below. If your Deacs are driving (whether on campus or in town), they need to be extra careful as they go around turns, because visibility is pretty poor with these high banks where the plowed snow has been pushed.

Finals continue. I was at the ZSR Starbucks early afternoon and it was surprisingly not that crowded. Students are all wearing the Finals Uniform (comfy clothes, minimal makeup, snow boots). Power on, Deacs. The end to this week is in sight. 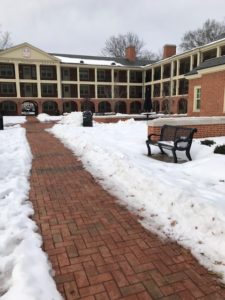 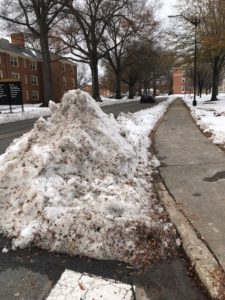 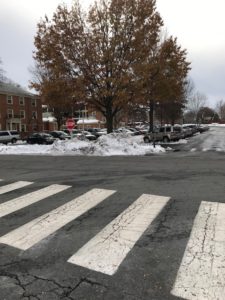 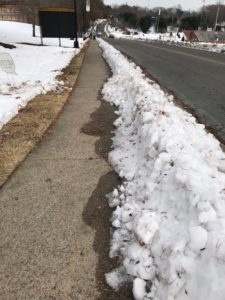 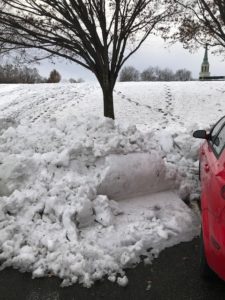