It’s pretty well-established that I am a soccer groupie, and this weekend provided the best (if most harrowing) finish of the season. Our men’s soccer team was in the ACC Championship game against a good Virginia team. Official recap here. My unofficial recap to follow.

We were playing a man down for the entire second half, and still managed to keep the game scoreless. Which is a pretty big show of just how good our team is.

So we go into overtime and a ‘golden goal’ situation, which means whoever gets a goal first wins.

At the end of first OT, still scoreless (or “nil-nil” as they say). So we go into double OT.

After a well-played 2nd  OT, still scoreless.  For those who are nail biters, you would have been down to the nubs.

Since we were still nil-nil at the end of double OT, it goes to penalty kicks. Which is truly the most nerve-wracking thing, because each team can put their best guy on the line and try to sneak one past the keeper.

I don’t have a photographic recall of sports plays, but my recollection was at some point they were up one and at some point we were, then at the end of all the PK shots, we were still tied. So then it goes round by round and until one team scores and the other does not, and the scorer wins.

We only had one extra round, but we got it.  And it was SO sweet. Especially considering we lost in the national championship game that way last year. So great for our guys to come out on top. 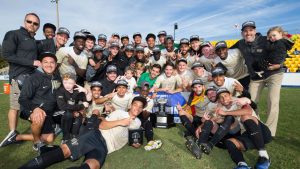 So now we head into the NCAAs ranked #1, and will have the luxury of hosting the tourney here this weekend. Your. Deacs. Must. Go.

That was not all the great Deac sports news. Women’s soccer had a similar outcome, advancing to the NCAAs on penalty kicks.  Our football team had an impressive win over Syracuse and are now bowl-eligible. And I neglected to mention the great men’s tennis news of last week.  There is probably other great Deacs news I am forgetting in my hysteria over the soccer win (no offense to any of our other sports, because I love you all).

All this to say:  EVERYTHING’S COMING UP DEACONS!