This Thursday evening at 5 pm in DeTamble Auditorium in Tribble Hall, there will be a lecture by Matthew Gallagher (’05).  Gallagher graduated with a major in history and minor in English and first served in Iraq in 2007.  He became famous for his wartime blog, which was cited by online and mainstream media outlets alike – and ultimately led to his writing a book called Kaboom.

On his Kaboom web site, his book is described as follows: 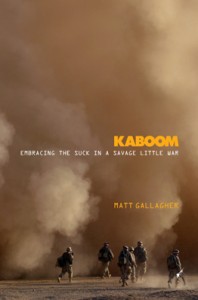 “When Lieutenant Matt Gallagher first arrived in Iraq in 2007, it was all too surreal. In the midst of a shift in U.S. policy from lethal operations to counterinsurgency, he encountered a world where nothing was as it appeared. Friends were enemies, reconciliation was war, roads were bombs, and silence was deadly. But it was all too real, and there was nothing left to do except learn to ’embrace the suck.’

And write about it.

Matt Gallagher started a blog that quickly became a popular hit. Read by thousands of soldiers who found in it their war, the real war, the blog covered everything from grim stories about Bon Jovi cassettes mistaken for IEDs to the daily experiences of the Gravediggers—the code name for members of Gallagher’s platoon.

When it was shut down in June 2008 by the U.S. Army, questions were raised in the halls of Congress and even a few eyebrows were raised at the Pentagon.”

I got a sneak peek at the latest issue of the Wake Forest Magazine, which will soon be hitting mailboxes of the larger Wake Forest family.  In it is an excellent article about Gallagher – a great and fascinating read.

Hope there is a strong showing for his lecture. It is bound to be very interesting.